Taking the traditional peanut butter and jelly sandwich to a new level – this Peanut Butter Cream Cheese and Jelly Roll-Ups recipe is a great way to spice up your lunch. A fun spin-off to a kids classic! School lunches just got an upgrade! 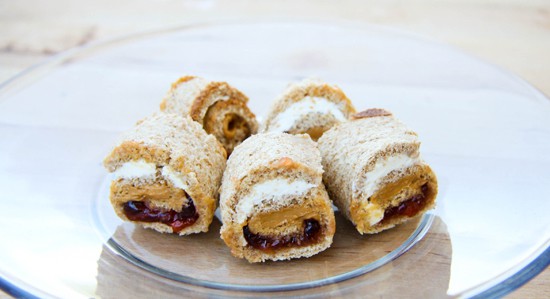 My silly 3-year-old has quite a unique way of eating his peanut butter and jelly sandwiches. He pulls all of the pieces apart and spreads them around on his plate, face up. Then he devours the pieces with jelly and licks any remnants of jelly off the peanut butter pieces. Which is peculiar, because he loves peanut butter. He would rather eat that from a spoon, though (like mama, like son!).

I found a creative way to make him a (not-at-all-healthy) spin-off of a PB&J so that he eats it all! Every last crumb. No sticky, peanut buttery mess to clean up after this is done.

Place a piece of bread on a cutting board. With a rolling pin, roll the bread out as flat as possible.

Cut off the crust edges with a knife to create a nice square-shaped piece of smooshed bread.

Put a stripe of jelly down the center of the bread. I like to put the jelly in the center so it doesn’t squish out the sides once the rolling happens.

Starting at either the PB or CC side, gently roll the bread with your fingers until it becomes a roll.

Slice one-inch pieces off with a knife and serve to a hungry child!

I made this twice since my first one did not turn out pretty. While I was shooting round two, Elijah had his little self wedged in our open fridge as he gobbled down every single one of my not-pretty rolls. And then he ate the second batch. And yes, I fed him vegetables for dinner.

For the peanut butter lover in your family Peanut Butter & Jelly Bars are a must try! You won’t be disappointed, the kid in all of you will say “YUM”!

A fun spin-off to a kids classic! School lunches just got an upgrade!